If you're interested in astronomy, you'll be in for a treat in the coming weeks, when a Blood Moon and the first lunar eclipse of the year will be visible on May 26.

Total lunar eclipses are also known as Blood Moons. They look slightly reddish-orange in color due to the scattered light falling on the Moon's face from Earth's sunrise and sunsets. 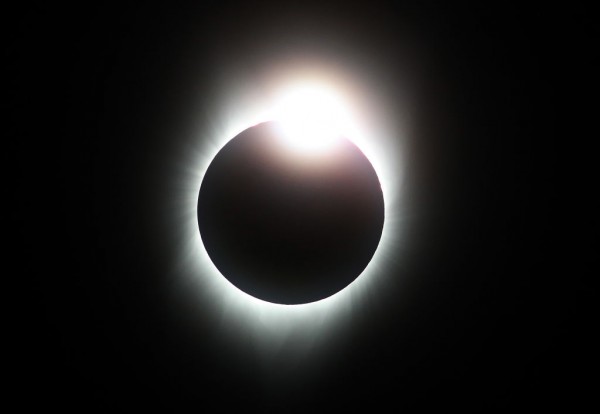 (Photo: Justin Sullivan/Getty Images)
CASPER, WY - AUGUST 21: A total eclipse with the 'diamond ring' effect is seen from South Mike Sedar Park on August 21, 2017, in Casper, Wyoming. Millions of people have flocked to areas of the U.S. that are in the "path of totality" in order to experience a total solar eclipse. During the event, the moon will pass in between the sun and the Earth, appearing to block the sun.

During this period, the Moon's color varies due to dust particles and various wavelengths of light reaching its surface.

Although the last total lunar eclipse is still remembered as a visual delight for moon gazers, Forbes claims that scientists accomplished something important during the event.

Here's what was found during the Moon's most recent ride across space, as it passed through Earth's shadow.

It is possible to calculate the ratio between the Moon and Earth radii using just a smartphone, a telescope, and a complete lunar eclipse.

On Jan. 20, 2019, two scientists in Santiago, Chile did just that during the total lunar eclipse. They published their study, titled "Estimating the Moon to Earth Radius Ratio With a Smartphone, a Telescope and an Eclipse," in arxriv.org. They photographed the cape of Earth's shadow on the Moon with a smartphone attached to a telescope.

They then measured the ratio between the radii of the Moon and the Earth using geometry and open-source tools. They got the same result as the known values. What's the bottom line? Using a smartphone camera, you can get impressive astronomical results.

Craters abound on the Moon. Obviously, indeed. As a result, it's likely that a blinding light will periodically be visible as a meteorite collides with the lunar surface. On Jan. 20, 2019, as totality was turning our satellite a rich reddish-orange, photographers and videographers filmed a 0.28-second-long flash on the edge of the Moon.

Jose Maria Madiedo of the University of Huelva in Spain had hoped to see it, so he and colleagues set up eight telescopes specifically to gather data at different wavelengths.

They got it. Hence, scientists published a paper titled "Multiwavelength Observations of a Bright Impact Flash During the January 2019 Total Lunar Eclipse." It is the first time scientists registered an impact flash unambiguously during a lunar eclipse.

Furthermore, they discovered that a similar occurrence occurred on Jan. 21, 2000, during a total lunar eclipse. Some have hypothesized in a paper, titled "Lunar Impacts During Eclipses Separated by a Metonic Cycle on Jan. 21, 2000 and 2019: A Possible Origin From Daytime Sagittarids/Capriconids Meteor Shower" that both impacts were caused by the same minor Sagittarids/Capriconids meteor shower since near-identical lunar eclipses occur almost exactly every 19 years.

Another Forbes article claimed that astronomers at the Leibniz Institute for Astrophysics in Potsdam (AIP) used a complete lunar eclipse on Jan. 20, 2019, to look for the ingredients for life in Earth's atmosphere.

What is the reason for this? To learn what to look for in the atmospheres of exoplanets, scientists can use Earth as a model of a habitable planet.

They discovered oxygen, water, sodium, calcium, and potassium in the faded and distorted sunlight shining through the Earth's atmosphere and reflecting onto the Moon during the total lunar eclipse-using Arizona's Large Binocular Telescope (LBT).

The LBT was looking for "Earthshine," which is sunlight reflected from the Earth's surface and reflected onto the Moon.