Coelacanths are ancient fish that was thought to be extinct but were recently discovered thriving in the deep regions of the ocean. But even after the surprise the lobe-finned gigantic fish brought the experts, coelacanths have another interesting feature aside from being enormous. In the new study, evidence suggests that coelacanths have a lifespan of up to a century.

Coelacanths Lifespan Up to a Century 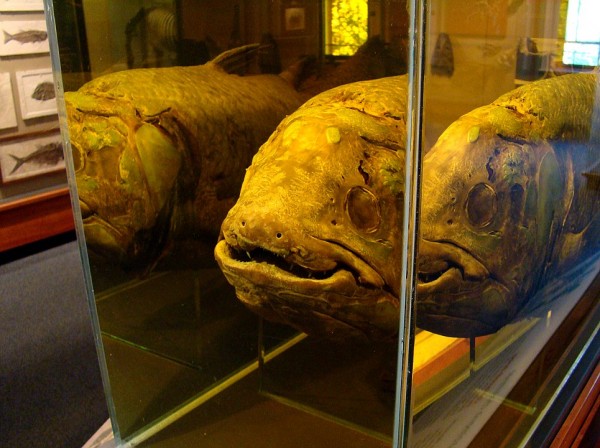 According to the researchers, the oldest subject of coelacanths they have is clocking almost 85 years of age. In addition to the long lifespan, coelacanths have a slow maturity compared to other fishes. Scientists estimated that the time of the coelacanth's maturity starts at age 55 and that the gestation period for their offspring takes about 5 years before giving birth.

Coelacanth's age was first based on the observation in its scale growth. The previous studies theorized that due to the ring of scales, coelacanths don't live for more than 20 years. The initial findings lead to the conclusion that the marine fish is one of the species that have fast progress of life, considering their extra-large size. This baffled the experts, as the idea of the fast-living progress of the fish doesn't add up to the features it exhibits, such as slow metabolism and low fecundity. The coelacanth's 20-year limit contradicts the ecological and biological features of similar deep-water fishes, reports MSN.

The new study published in the journal Current Biology entitled "New scale analyses reveal centenarian African coelacanths," it was found that coelacanths can live for a stunningly long time, which can also be nearly a century. IFREMER Channel and North Sea Fisheries Research Unit, and principal author of the study Kélig Mahé, together with his colleagues, have been granted by the Muséum National d'Histoire Naturelle de Paris MNHN to gather data and research about the life expectancy of coelacanths.

MNHN Paris houses the largest collection of coelacanths from every part of the world. The varieties of the collection range from embryos to the actual fish that scales up to 2 meters. Through the museum's help, Mahé and his team were able to study 27 different specimens of the giant fish. Compared to the initial examination, marine biologists utilized new methods for calculating the age limit of the coelacanths. Their process included the polarized light microscopy and scale interpretation system developed at IFREMER's Sclerochronology Centre in France. The technology has been beneficial to identify the exact age and body growth of the living ancient fish with high accuracy, reports Science Daily.

The new approach of examination allowed the scientists to harvest little, imperceptible circuli from the scales of the coelacanths. The process was significantly better than the observation from the initial study that heavily relied on the visible, bigger circuli structures. The samples from the fish revealed that the age of the coelacanths was five times older than the initial guess.

Along with the scales, coelacanth embryos were also examined. The findings have been the same with the circuli observations and serve as supporting evidence to the 5-year multiplication of coelacanth's age. The embryos were identified to be clinging five years inside their mother's womb prior to birth.

RELATED ARTICLE: Giant River Otter Resurfaces in Argentina After Being Extinct for Over 40 Years