The Cygnus cargo spacecraft, manufactured by Northrop Grumman, just delivered its largest delivery to the International Space Station for NASA.

At 6:07 a.m. EDT on Thursday, astronauts using the station's robotic arm grabbed the Cygnus NG-16 spacecraft as the spaceships flew over the Atlantic Ocean. 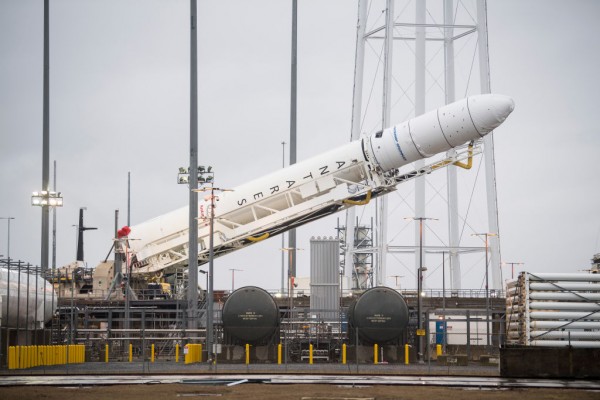 (Photo: Photo by Aubrey Gemignani/NASA via Getty Images)
WALLOPS ISLAND, VA - FEBRUARY 5: A Northrop Grumman Antares rocket carrying a Cygnus resupply spacecraft is raised into a vertical position on Pad-0A February 5, 2020, at NASA's Wallops Flight Facility in Virginia. Northrop Grumman's 13th contracted cargo resupply mission with NASA to the International Space Station will deliver about 8,000 pounds of science and research, crew supplies, and vehicle hardware to the orbital laboratory and its crew.

Slash Gear said the Cygnus space ship took up a tentative position around 10 meters from the ISS' capture point after reaching the general vicinity.

Cygnus - dubbed S.S. Ellison Onizuka - was remotely placed on the existing Unity module after NASA astronaut Megan McArthur used the controls to get the items. NASA said the mission was finished at 9:42 a.m. ET. The space agency added that the spacecraft would continue in orbit for the next three months or so. The departure date has been set for November 2021.

What Did Cygnus Bring?

Space.com said Cygnus departed from NASA's Wallops Flight Facility in Virginia on Tuesday and arrived at the space station with at least 8,200 pounds (more than 3,700 kilograms) of experiments, equipment, and supplies for the astronauts onboard Expedition 65

A carbon dioxide scrubber to guarantee breathing air for the crew, new hardware, and other tools for the station's improved solar arrays are all included in the cargo. Biological payloads, a brainless slime mold, and two payloads to investigate human muscle cells in orbit are among the studies onboard Cygnus.

Slash Gear said that some new work is also to be done despite the International Space Station astronauts obviously being delighted about the additional supplies aboard the capsule. Several experiments have taken this route to the space station. Some of which might significantly influence future space missions, such as NASA's Artemis.

The Redwire Regolith Print research, for example, aims to use 3D printing processes on a substance meant to resemble Moon rocks and dirt. Instead of physically transporting construction materials from Earth to the Moon - or beyond, in future expeditions - the experiment theorizes that resources from other planets and moons might be used instead. This may be utilized for shelters and other buildings, and astronaut urine could even be a significant element in the process.

Possible ways to disperse heat during extended missions are being investigated in the Flow Boiling and Condensation Experiment. While space is typically chilly - there is, in fact, a surprising quantity of ice on the Moon - the higher power demands of longer space missions will generate more waste heat that must be dissipated. A two-phase thermal management system, which relies on both vaporization and condensation to be more effective while smaller and lighter, is one possible solution.