The European Space Agency (ESA) confirmed on Tuesday that it is hiring, for the first time since 2008, new astronauts and is allowing women and persons with disabilities to join. 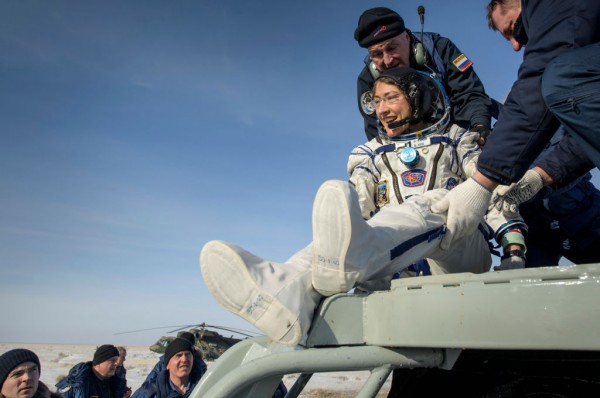 (Photo : Bill Ingalls/NASA via Getty Images)
ZHEZKAZGAN, KAZAKHSTAN - FEBRUARY 6: In this handout image supplied by NASA, NASA astronaut Christina Koch is helped out of the Soyuz MS-13 spacecraft just minutes after she, Roscosmos cosmonaut Alexander Skvortsov, and ESA astronaut Luca Parmitano, landed their Soyuz MS-13 capsule in a remote area near the town of Zhezkazgan, on February 6, 2020 in Kazakhstan. Koch returned to Earth after logging 328 days in space --- the longest spaceflight in history by a woman --- as a member of Expeditions 59-60-61 on the International Space Station. Skvortsov and Parmitano returned after 201 days in space where they served as Expedition 60-61 crew members onboard the station.

Worner noted that although ESA still has astronauts from the last selection phase, to "secure continuity" and ensure a seamless transition of expertise from one class to another, new astronauts are required.

The organization is planning to recruit up to 26 regular and reserve astronauts, Worner added. And it actively invites minorities, as well as individuals with disabilities, to apply to its roster to raise crew diversity. The agency has initiated a 'parastronaut' initiative to evaluate what is required to bring injured astronauts to the International Space Station.

Samantha Cristoforetti, an ESA astronaut, said per The Guardian that if technology allows other people to function and succeed in space, it can also do so for the impaired.

"When it comes to space travel, we are all disabled. You know, we all have a disability because we were just not meant to be up there. So, what brings us from being, you know, disabled, to go to space to [be] able to go to space is technology."

ESA will welcome applications to fill its astrocorps of four to six vacancies, but it needs this draft process to be as fair as possible.

A master's degree in natural sciences, chemistry, mathematics or computer technology, and three years of post-graduate experience are the criteria for an ESA astronaut position. Yet, the department argues that it is searching for "all-arounders," not professionals.

The application phase starts on 31 March, with all the information on the ESA website open. The cycle will continue until 28 May of this year, with the findings due in October 2022 to be reported.

In contrast to the key call, ESA would perform the hunt for a possible flier with additional functional requirements. The agency has requested the International Paralympic Committee to inform it on selection.

Dr. David Parker, the director of Esa's robotics and human spaceflight also happens per BBC that they are not "[hiring] a space tourist that [happens also] to have a disability."

He underscored that it would be a meaningful space mission for this guy. They would then need to do science and engage in all of the International Space Station's daily activities.

The opportunity to learn Russian, one of the languages used on the space station, would be part of the educational curriculum.

What Happens Next When Accepted?

At least four individuals can go right through the ESA astronaut corps in Cologne, Germany, in the recruiting process. Additionally, a further 20 members would go into a reserve.

This is now feasible since, on a commercial basis, the American aerospace firms SpaceX and Boeing will offer seats in their new crew capsules with NASA's help.

If the member state purchased this chance, ESA would train the national candidate in the reserve pool.

Often, the qualified applicant with an impairment would go through a reserve. ESA will then collaborate on the ISS with its collaborators to determine the right route for a para-astronaut to fly.

ALSO READ: Space Debris Can Pose Serious Threats To Humans According To ESA