Apple fans in Singapore are in for a treat as the world's first floating Apple store is set to open soon in the city-state's Marina Bay Sands.

The new outlet will be located in a sphere floating on Marina Bay, offering the latest products and support in the space that formerly housed the high-profile nightclub Avalon from 2011 to 2016.

"We will soon open the doors to our new store by the Bay," Apple said on its webpage for the upcoming Singapore store.

According to German online portal Statista, Apple leads the Singaporean market for mobile devices, covering approximately 33.6 percent of sales. It has then surpassed its main competitor in the country, the South Korean electronics manufacturer Samsung, which holds 29.18 percent of the market share.

Apple first established a foothold in Singapore with a store at the Knightsbridge Mall located along Orchard Road. The Knightsbridge Apple Store first opened on May 27, 2017. Aside from being the first in Singapore, it also marked the first Apple Store in the entire Southeast Asia region. The branch features a huge mural showing the iconic Apple logo, a heart, and a little red dot - a statement that says "Apple Loves Singapore." The "little red dot" is a common nickname used by media outlets to refer to Singapore, which appears on maps as a small red dot. 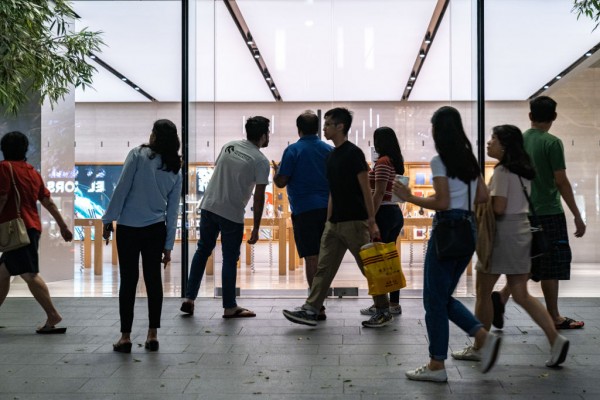 (Photo : Photo by Ore Huiying/Getty Images)
SINGAPORE, SINGAPORE - MARCH 15: People looks into an empty flagship Apple retail store on Orchard Road on March 15, 2020 in Singapore. The store is temporarily closed after Apple announced that it is closing all stores outside Greater China for 2 weeks due to the coronavirus.

Their second branch was located in the Jewel Changi Airport, a mixed-use entertainment complex linked to the world-renowned Changi Airport. Another marvel, the store first opened on July 13, 2019, filled with staff who can reportedly speak 11 languages between them- including sign language, German, Italian, Malay, Mandarin, Hindi, and more.

The two-storey Apple store has a staff of more than 100 people ready to support its growing customer base in the country. Most of its interior is visible thanks to a sweeping glass facade covering one side of both floors. The Jewel Changi is the first Apple Store branch to be located inside an airport complex and making the most of its new location, released a limited-time event called "The Magic of Jewel Changi Airport Photo Walk." It was a one-hour session that allows iPhone and iPad users to learn photography techniques as they move around the Changi Airport - hailed as the "World's Best Airport" for the eighth consecutive year this 2020.

A Tech Giant on Its Way to New Heights

On Monday, August 24, Apple CEO Tim Cook celebrated his ninth year as the company's top executive. Furthermore, the company has also officially started its split-stock process right after the day's trading session - a landmark move that does not harm stock values, but invites more investors to join. Apple is set to increase its total shares, with existing stockholders to receive their additional shares on Friday, August 28, and interested parties can start trading their split-adjusted shares starting August 31.

It follows Apple's recent financial breakthrough of being the first publicly trading US-listed company to cross the $2 trillion mark, and the second worldwide to achieve the feat. Apple surpassed oil titan Saudi Aramco, which posted its own $2 trillion pass last December.