A new Rolls-Royce aircraft engine is soon to operate as the company announced it has begun working on its UltraFan aero engine, soon-to-be the world's largest of its kind.

According to Popular Mechanics, the giant fan engine gets 25-percent better mileage than its forerunner, and Rolls-Royce claimed it will have passenger and cargo flights all over the world.

What's described as the first demonstrator engine will reach completion by the end of this year. In a statement it issued, Rolls-Royce revealed more details saying that as engine build begins, other key parts are coming back together already, "for delivery to Derby."

The company also indicated in its statement that works on the carbon titanium fan of UltraFan is underway in Bristol, United Kingdom, and its 50-megawatt Power Grearbock, is powerful enough to run about 500 family cars, in Dahlewitz, Germany. 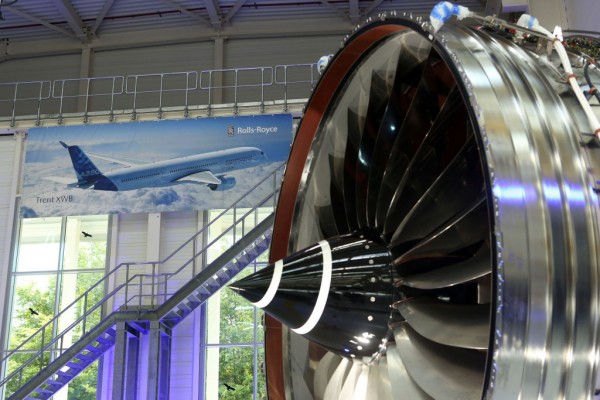 (Photo: Adam Berry/Getty Images)
The Rolls-Royce Trent XWB airplane engine, to be used in the Airbus A350 XWB aircraft, is seen on its assembly line on June 14, 2017, in Berlin, Germany.

UltraFan, as described on Roll-Royce's website, is a gas turbine turbofan which means it is gas-powered and it is operating through the use of a traditional spinning prop fan. In this case, it is a fan with a diameter of 11 feet.

Rolls-Royce has a commitment to attaining zero-net greenhouse gases by the year 2030, and the UltraFan is currently being developed and designed to operate on sustainable jet fuels.

The company said Gas turbines will remain to be the foundation of long-haul aviation for several years, and the efficiency of this giant fan will contribute to the improvement of the economy of a transition in the industry to more sustainable fuels which are possible to be costlier in the short-term compared to the traditional fuel.

The enormous size of UltraFan matches with the state-of-the-art core of Rolls-Royce, and the ALECSys lean-burn combustion system, according to the company's website, to retain emissions as low as possible for a jetliner powered by gas.

The UltraFan may have a gigantic size, but it reduces the weight as well of an aircraft by 1,500 due to space-age materials, not to mention careful design.

Such materials as part of the specifications comprise advanced ceramic matrix composite parts and carbon titanium fan blades known for their ultra-strong features while retaining weight down.

Not seen in physical features, this aero engine is equipped with sensors and software that are, according to the statement, similar forward-thinking that each fan blade comprises a digital twin, storing real-life test data, enabling engineering to forecast in-service performance.

In addition, it was also stated that when on test at the new "testbed 80 facilities," data can be taken between over 10,000 parameters, identifying the smallest of vibrations at a maximum rate of 200,000 samples a second.

This particular level of micro-shaving of weight that has an eye on emissions is making the engine more possibly, a play out of the supercar design handbook.

This company is doing the corresponding of tossing out the unnecessary passenger seat, as well as the cushy passenger suspension so that it can cut or decrease weight.

A related report is shown on Rolls-Royce's YouTube video below:

Check out more news and information on Clean Energy on Science Times.