Heroic Pig That Survived 2008 Sichuan Earthquake Dies at 14; What Makes This Animal Special?

A pig that gained notoriety in China after spending 36 days under the rubble during a severe earthquake in 2008 has died.

According to the museum in China's Sichuan region where the animal resided, Zhu Jianqiang, or "Strong-Willed Pig," died on Wednesday night of "old age and exhaustion."

It was viewed as a symbol of optimism and resiliency at the time of its rescue. 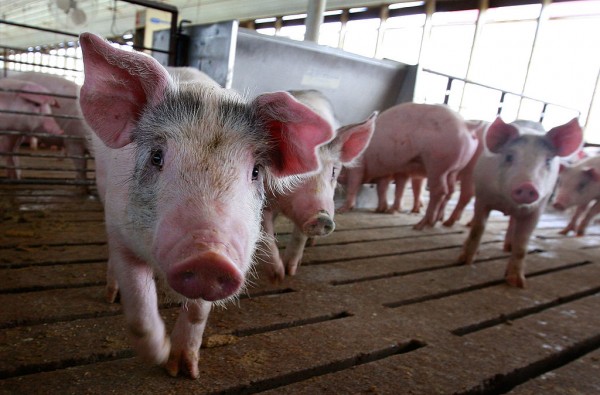 (Photo: Scott Olson/Getty Images)
[REPRESENTATIONAL PHOTO] ELMA, IA - APRIL 28: Hogs are raised on the farm of Gordon and Jeanine Lockie on April 28, 2009, in Elma, Iowa. Hog farmers who have been battered by rising feed prices are now faced with plummeting hog prices driven in part by misconceptions about the relationship of Swine Flu to eating pork and recent import bans on raw U.S. pork by some countries.

Millions of people have paid gratitude to the pig's long life on the Chinese social media site Weibo.

Zhu Jianqiang died at the age of 14, according to the Sichuan Museum of Jianchuan.

A resident of Tuanshan village in Chengdu, Sichuan province, owned the female pig. After the 7.9 magnitude earthquake in May 2008, Zhu Jiangqiang was trapped under a full of charcoal and rainwater and survived for 36 days. Apple Daily said the pig's weight reduced from 150 kg (330.7 pounds) to 50 kg (110.2 pounds).

According to rescuers, by the time it was freed, the pig was so skinny that it resembled a goat. It is claimed to have been severely traumatized as a result of being trapped.

It was purchased by a Chengdu museum for 3,008 yuan ($450) and displayed as a tourist attraction. The museum had warned earlier this year that the animal wouldn't be around for much longer.

Scientists Made Clone of Zhu Jianqiang

Scientists cloned the pig in 2011, producing six piglets who looked identical to their father except for a blemish between their eyes.

Although Zhu is castrated and five years old (60 years in human age) at that time, the cloning attempt was a success.

"The wonderful pig surprised us again," Du Yutao, the head of the cloning project, told Sunday Morning Post (via BBC).

South China Morning Post said the project spent a high price of 10,000 yuan (approximately $1552) for each piglet because of their father's "heroic" genes. Doctors at a Shenzhen biotechnology firm purposefully changed their genes so that they were not similar.

What Made The Pig Special

What's really behind the attention is not just a pig - but a collective memory, the museum explained on Chinese social media platform Weibo.

"It is a miracle of life; it is a symbol of strong will," the museum said (via The New York Post).

The rescue gripped the nation to the point where Jianchuan Museum owner Fan Jianchuan purchased the pig so that Zhu might be remembered every day.

Fan bought the pig to keep it from being slaughtered. The museum owner never expected Zhu to live longer. However, the pig's health deteriorated over time.

People flocked to social media after hearing about the pig's death to express their condolences. The hashtag "Strong-Willed Pig has died" has received at least 430 million views on Weibo.

"Thank you for interpreting the greatness of life with your own strength," one user said per BBC.

"RIP you are the miracle of life and the symbol of strength," another wrote.

RELATED ARTICLE: The COVID-19 Pandemic Leads to Increase in Animal Abuse and Abandonment: Here's Why